What is looking great over the next month!

The Spectacular and Interesting February to March

There is always something putting on a show in the Gardens and the summer months are some of the best of times with many plants now reaching their full show glory!
Meander through the many seemingly secret garden pathways and perhaps even discover that hidden treasure that you might be the first to see? Here again is a snapshot of what’s in show, the curios, the showoff’s and the bashful, that always delight the senses. Why not see if you can find them??

The Empress flower – Brunsvigia josephinae  (click on images above for larger view)
An amazing plant and it is just coming into flower in the Gardens during February and early March. The small red flowers are held on magnificent umbrella like heads which rise to over 1m from fat leafless partially exposed bulbs at ground level. This plant comes from the deserts of Africa and it has adapted to dry conditions at certain times of the year. It is a plant that is fully deciduous during the summer, producing only the fantastic flower heads which in turn become large seed heads that eventually break off and roll around in the wind, essentially a cunning method for dispersing their seed. The plant itself belongs to the same family as Amaryllis belladonna or Naked Ladies as they are known in Tasmania. The plant found in the Gardens is over 25 years in age and has multiple side bulbs of varying ages. They normally take from 12 to 2o years to flower consistently so be prepared to wait some time if you wish to grow one from seed.

The plant is named after Napoleon’s first wife Joséphine de Beauharnais who also funded a number of plant collecting trips in the late 1700’s. See it at the southern end of the Gardens near the entrance to the Subantarctic House.

A fascinatingly beautiful and somewhat curious plant is currently flowering in some areas of the Gardens. The Purple Parsnip or Korean Angelica, Angelica gigas certainly makes an impact. The curious bulbous purple buds atop its tall stems bursting into large, up to 20 cm heads of flower, that provide nectar and pollen for a vast array of bees and beneficial insects.This plant is easily grown from seed and looks good in most locations in a garden, from semi shade to full sun. A short lived perennial plant that bursts into flower in the summer months it thrives in organic well composted soils. We have large clumps of these in the Chinese garden just up from the main Domain (large iron gates) entrance and more in the Friends perennial border.

The Japanese Windflower actually has its origins in China although it has been naturalised in Japan for centuries. It holds its flowers above its leafy base to a height of over 1 meter and it’s not too hard to see why they are called wind flowers, as the flowers tend to dance with the slightest breeze. The flowers are ivory white through to shades of pink and even cerise forms.They are a clumping plant that spreads readily given good conditions of organic mulches and summer moisture. They are relatively hardy in Tasmania and will be suitable in shade and full sun. Best areas to view them in the Gardens at the moment are in the higher beds around the Lily Pond.

The stunning yellow orchid like flowers of this mostly ornamental flowering ginger make it truly one of the most marvellous little surprises in the summer garden. See this plant in bloom in the Chinese Garden just up from the main Domain entrance, and if you are lucky on a still evening its heavenly scent will tantalise the senses.

This stately giant of the lily world can grow to over 2 meters in height and boy do they make a statement in the garden during summer. These are currently in flower and looking at their best near the entrance to the Chinese garden.

This is a beautiful and hardy tree from parts of north east Queensland, Lord Howe Island and Norfolk Island. It is incredibly tolerant of a wide range of locations from coastal to cool temperate. The stunning pink to mauve Hibiscus flowers are produced on mass in summer and blanket the ground under the tree. Also known as Itchy Pod trees, as the large seed pods contain sharp hairs that irritate the skin, beware! Our tree stands near the large floral clock close to the palm grove.

Always a treasure to see this magnolia in flower with its large dish sized flowers of creamy white opening from an ivory bud to reveal an intriguing lightly pink centre with a delightful lemon fragrance. This tree from the eastern USA is a hardy favourite in Australia with various smaller cultivars also popular. You can find it just opposite the Floral Clock.

This is a rare native of the east coast of Tasmania and some parts of mainland Australia. Here it is under-planted between Old Man Banksia, Tasmanian Banksia serrata trees. It is an annual to short lived perennial plant that flowers profusely through the summer months. The flowers can be long lasting in dry flower arrangements. They can be found in the native garden section beyond the fern house. 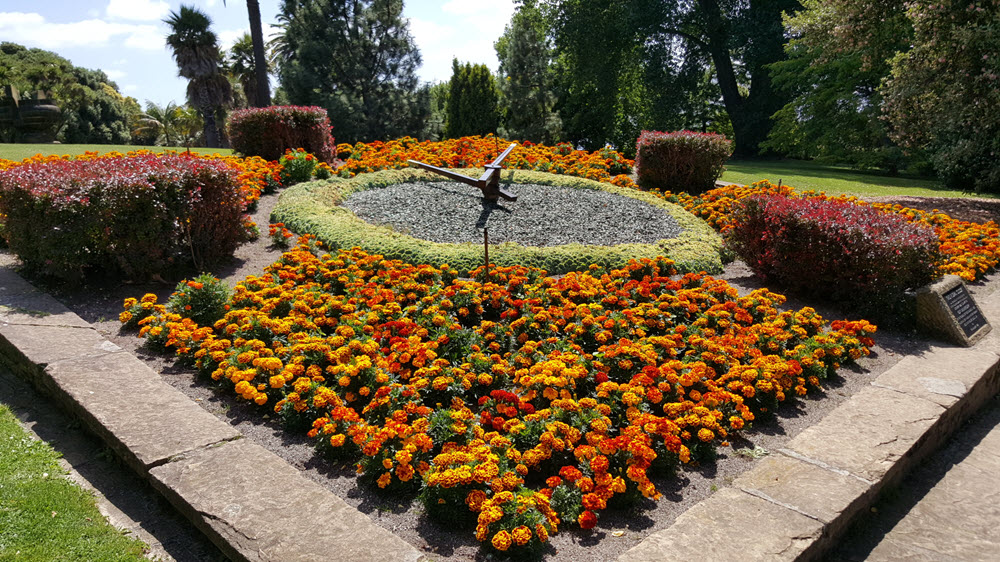 The Floral Clock is a classic feature of many botanical gardens around Australia. This one was installed in 1969 to commemorate the 150th anniversary of the founding of the Royal Tasmanian Botanical Gardens. It’s annual and succulent displays mark the time of the seasons.
The Gardens will be 200 years old in 2018 and we are planning on making it a year to remember.

Previous what’s spectacular in the Gardens

September to October
November to January