What is a botanic garden? 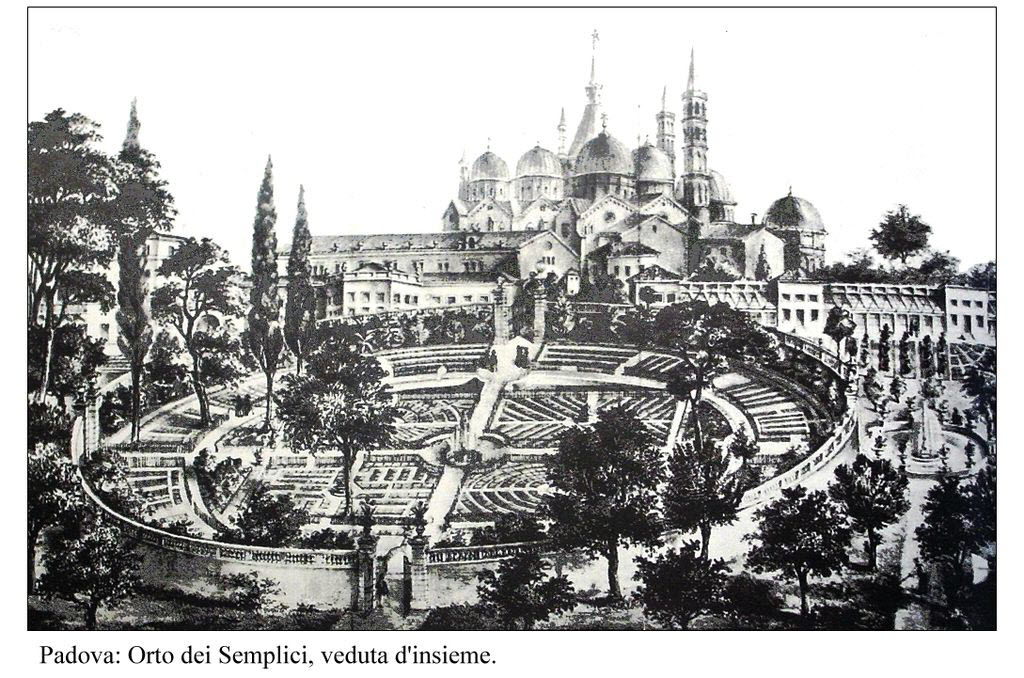 Traditionally, botanic gardens are defined as places were a wide variety of documented living plants are cultivated for ornamental purposes, scientific research and education. The world’s first botanic gardens were the university gardens of Italy in the 16th and 17th centuries (fig.1). These gardens were purely for the academic study of medicinal plants.

For over five centuries, botanic gardens and herbaria around the world have been generating resources and expertise and teaching us most of what we currently understand about plants, how to grow them and their uses. Today there are more than 2000 botanic gardens worldwide, devoted to the culture, study, and exhibition of documented collections of living plants.

But in the 21st century, botanic gardens are more than just beautiful places to visit. Climate change, habitat destruction, invasive alien species and over-exploitation all pose direct threats to plant survival and the earth’s biodiversity. Arguably the most important role of modern botanic gardens is the conservation of plants1. Indeed for some threatened plant species, botanic gardens have become the last hope for their precarious survival.

Ex situ and in situ conservation

Plants can be conserved both in their natural habitat and elsewhere.

Botanic gardens support plant conservation in a variety of ways

Botanic gardens maintain living collections of plants ex situ, often displaying plant species under various groupings for show and conservation, to maintain a living store of genetic diversity that can support many activities in conservation and research. 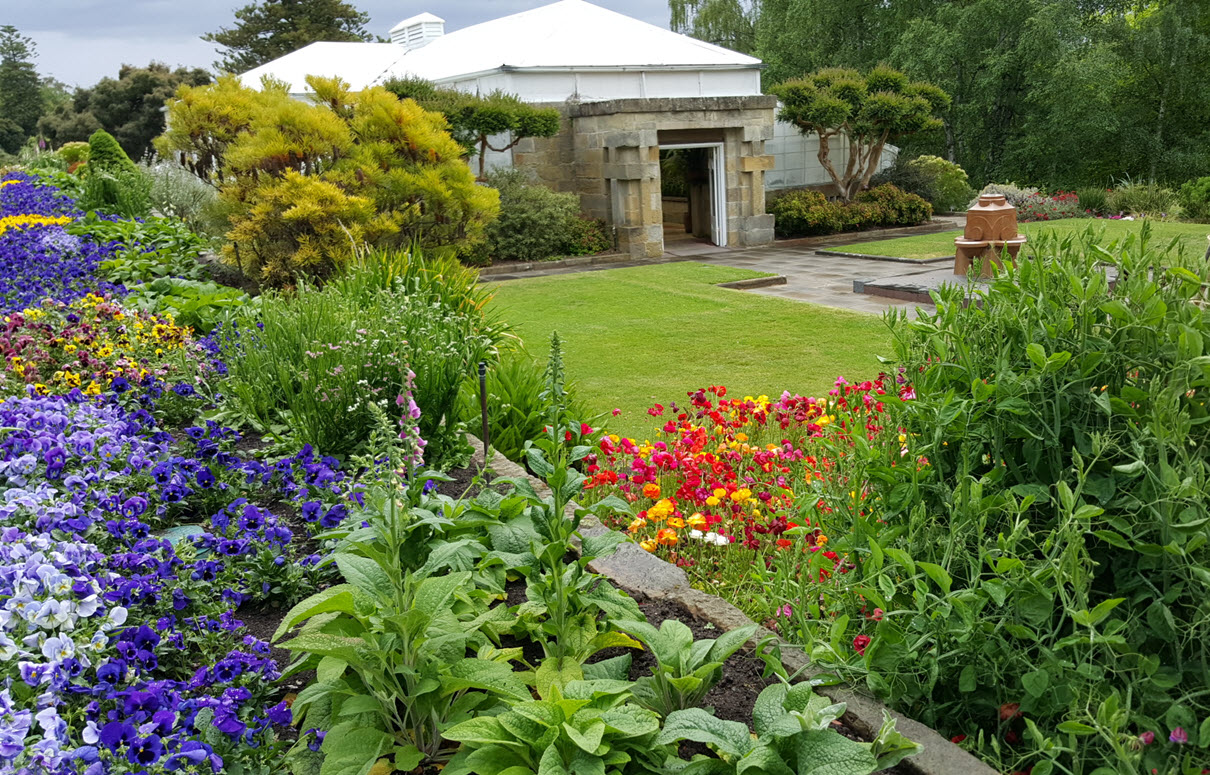 Horticulture and cultivation allows botanic gardens to grow plants for show and pleasure but also an incredibly important place to house those that might become extinct in the wild (fig. 2). This maintains the conservation of genetic diversity ex situ but also allows plants to be used in restoration and rehabilitation of degraded habitats in situ. 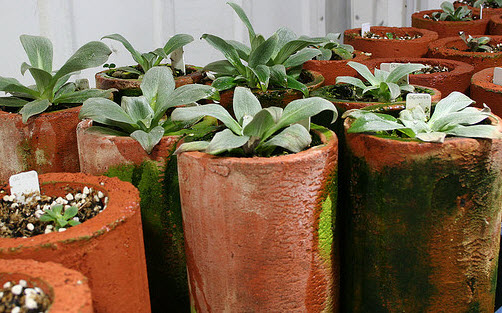 Fig 3. Cultivation of the sub-antarctic megaherb Pleurophyllum hookeri (Asteraceae) in refrigerated units at the RTBG nursery

Figure 3. Cultivation of the sub-antarctic megaherb Pleurophyllum hookeri (Asteraceae) in refrigerated units at the RTBG nursery. Pleurophyllum has proved difficult to establish and maintain in cultivation, but recent changes in horticultural practice by head propagator Lorraine Perrins has met with Fig. 2greater success.

Botanic gardens are presented with the opportunity to store the seeds or germplasm of plants for future use, research and propagation. This is another method of ex situ plant conservation known as seed banking. Seeds must be carefully collected and stored to ensure maximum genetic diversity is retained, and much research is required to determine the best way of storing different seeds. 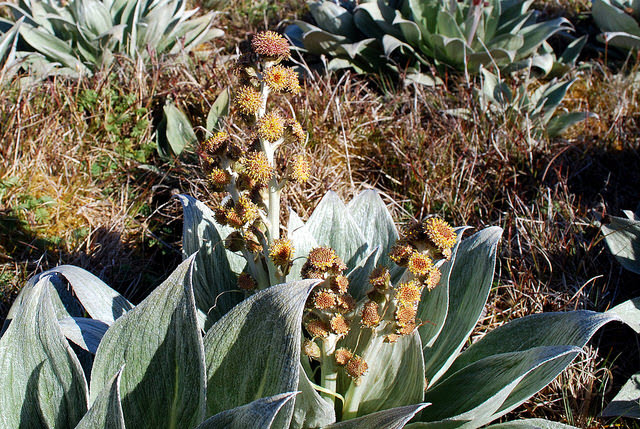 Botanic gardens may carry out research and development into plant taxonomy and genetics, phytochemistry, useful plant properties, efficient seed banking methods, plant translocation and many more botanical areas that support plant use and conservation. Research into how plants withstand degraded and changing environments is especially important in light of increasing human activity and predicted climate change.

Education is a historic strength of botanic gardens, allowing them to communicate the importance of conserving plants to a diverse audience, while demonstrating how this might be achieved. The RTBG provides a number of education programs.

Linking plants with the well-being of people, and also helping conserve indigenous and local knowledge, encourages the sustainable use of plant resources for the benefit of all, as part of sustainable development.

There are simply not enough protected areas in the world to conserve all plant species. Of those that do exist, most are small, fragmented and highly vulnerable to threats such as climate change, invasive alien species (introduced plants and animals), natural disasters and political instability.

What is seed banking?

Banking or storing seeds of horticulturally significant species has been going on in some form since the advent of agriculture at least 13,500 years ago. However ‘conservation seed banking’ of wild plant populations is a much more recent response to the global decline of plant biodiversity.

Figure 1. In the Tasmanian Seed Conservation Centre’s seed bank collections are stored in sealed foil packets and placed in a freezer unit at -20°C.

The process of seed banking involves:

Seeds are nature’s genetic storehouses; they occupy little space and require minimal attention over considerable periods of time. If banked correctly, most seeds can be grown into plants well into the future.

Banking seeds is recognised globally as a scientifically proven, highly efficient and cost effective method of conserving the variation within and between different plant species. Consequently in recent years modern, high-tech seed banks have been built in many countries around the world for the ex situ conservation of wild plant species.

By saving seeds, we can save plants

In the case of highly threatened species a seed collection can often represent a far greater number of ‘potential genetic individuals’ (plants) than their habitat area can support in the wild. To demonstrate just how effective seed banking can be, consider the following example:
Euphrasia phragmostoma (Orobanchaceae, fig. 2) is a species endemic to a 1.6 km stretch of sea cliff on the Tasman Peninsula. Along this one stretch of cliff E. phragmostoma grows on narrow ledges and in cracks covering a total area of just over half a hectare. That’s an in situ population of around 700 individuals. By comparison, the seed collection for this species, safely stored in the ex situ seed bank, is of over 27,000 viable seeds.

For every seed collection made in Tasmania and stored in the Tasmanian seed bank, a duplicate collection is sent to the Millennium Seed Bank Project. This provides extra insurance against natural and man-made catastrophes.

Seed banking provides a last resort for the protection of plant species that are already condemned to extinction. Urgent candidates for seed banking are plant species under severe threat in the wild. The Millennium Seed Bank Project  in the UK, and its international partners (including the TSCC), identify endangered plant populations as a priority and attempt to collect seed before it’s too late.

A strict sampling procedure is necessary for plants that only exist in small numbers in the wild, to ensure the population is not diminished by seed collecting.

There is a fast growing global network of people involved in seed banking and related subjects, including people and organisations with research, conservation and/or industry backgrounds.

More information about national and international seed conservation and research is available.

For further information about other national and international seed banks, please visit:

Modern, high-tech seed banks, for the ex situ conservation of wild plant species, have been built in many countries around the world in recent years. Consequently there is a fast growing global network of people involved in seed banking and related subjects, including people and organisations with research, conservation and/or industry backgrounds.

Several international organisations now exist dedicated to the seed banking and seed science that goes on in seed banks, botanic gardens, universities and other research establishments.

The International Seed Testing Association (ISTA) was founded in 1924 with the aim of creating global uniformity in seed testing. ISTA has member laboratories in over 70 different countries and works to:

The International Society for Seed Science

The International Society for Seed Science [external link] (ISSS) was inaugurated in 1999 for ‘the advancement of education and research for the public benefit in the scientific study of seeds’.

Benefits to ISSS members include:

The ISSS are also involved in political and public relations activities affecting seed research and utilisation.

The Seed Conservation Department of the UK’s Royal Botanic Gardens, Kew is home to the largest ex situ conservation project ever conceived: the Millennium Seed Bank Project [external link] (MSBP). Partners in this project, located in approx. 36 different countries worldwide, will have banked seeds from 10% of the world’s wild plant species (around 24,200 species) by the end of this decade. Plants conserved will include the rarest, most threatened and most useful species known to people.

Seed collections held in the MSB, and the knowledge scientists are deriving from them, provide almost infinite options for their conservation and use. Not only will these seeds remain alive in the MSB for decades and, in many cases, hundreds of years, but proportions of collections are already being used to provide a wide range of benefits to mankind, ranging from food and building materials in rural communities to disease-resistant crops for agriculture.

In light of predicted climate change and the ever-increasing impact of human activities, the MSBP intends to accelerate its activities to conserve the seeds of 25% of the world’s plant species by 2020.

An Australian network for the collection, storage, research and sustainable use of seeds for native plant conservation. Formed in 2007 of Australia-based MSBP partners, AuSCaR delivers seed banking of Australian flora in conjunction with botanic gardens, conservation agencies, universities and non-government conservation organisations.

There are currently thirteen Australian institutions involved in AuSCaR, covering all six states and the Northern Territory. Each state and territory has developed programs and facilities for the collection and long term seed banking of native species.

AuSCaR prioritises the conservation of Australia’s endemic, endangered and economic species, and seeds of approximately one third of Australia’s unique flora (over 8,000 species) will be collected and stored by the end of 2009, supporting the achievement of Target 8 of the Global Strategy for Plant Conservation (2002).

Collaborative research at both national and international level between MSBP partners is improving our understanding of Australian native seed biology. Major research areas include seed germination and dormancy, seed longevity and biotechnologies for the conservation of recalcitrant seeds. In addition, data regarding species population size and range, obtained during seed collecting, will enable predicted climate change impacts to be assessed.

The Australian Journal of Botany