The French Memorial Fountain is a significant sculptural element in the Gardens. It represents the bow and sails of an early French sailing ship, and was erected in 1972 to mark the bicentenary of the first of a number of French voyages of discovery that visited Tasmania from 1792.

The fountain was designed and constructed by the well-respected Australian artist Stephen Walker whose many other creative and beautifully detailed works can also be seen in other parts of Hobart and Tasmania, including the well-known bronze Bernacchi Tribute on the Hobart waterfront. 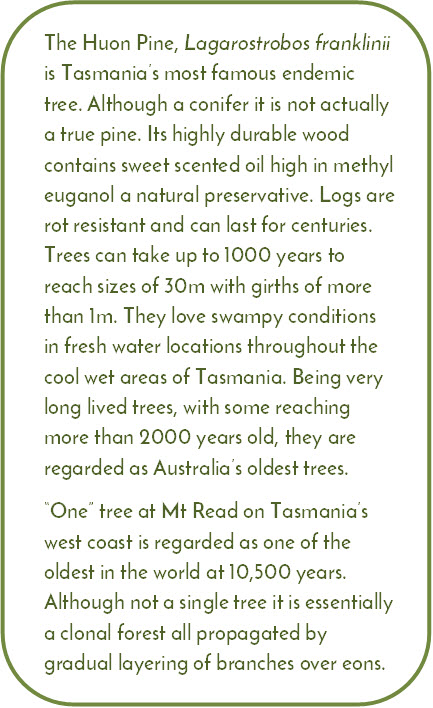 Mr Walker lived in Tasmania for many years and as a local sculptor, he used the Tasmania native Huon Pine Lagarostrobus franklinii for its construction. The use of Huon pine within this sculpture is both practical and historically significant. In the past it has been a much sought after timber tree for wooden boat building due to its strength, ease of finishing, and its significant resistance to rot and various marine parasites. These characteristics also make it a useful timber as a sculptural water feature of this type and size.

Inspired by nature, it is a unique sculpture that captures the essence of water in the landscape and its overall importance to life, while also gently highlighting its functional use by humans in history. It is the only public Huon pine piece created by Mr Walker. 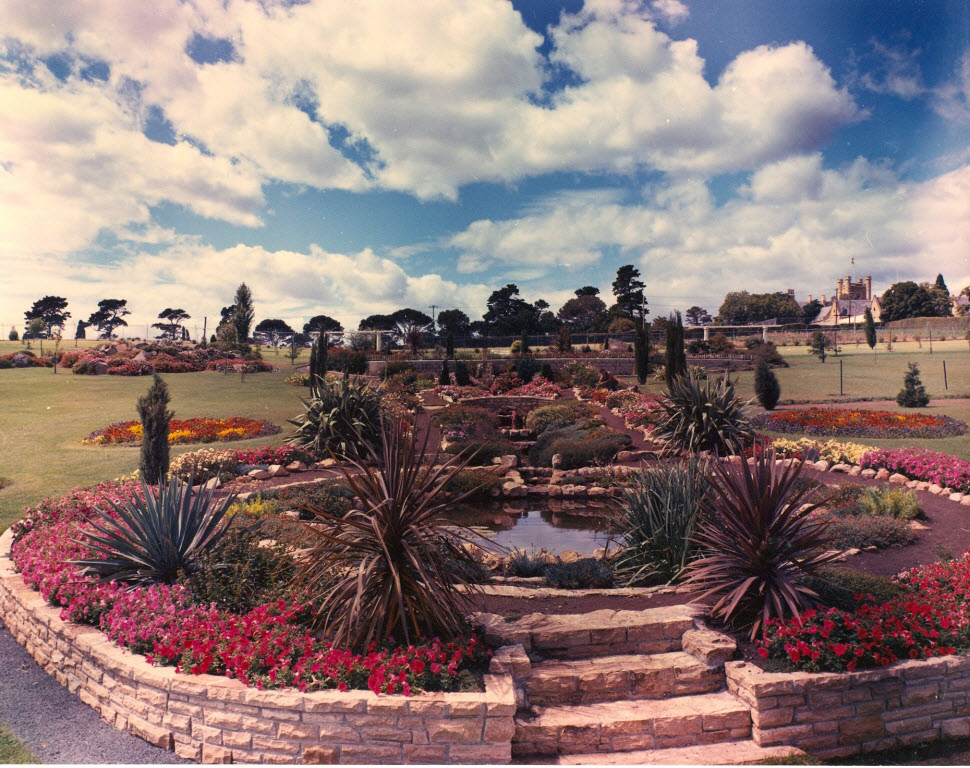 The fountain was built into an earlier horticultural feature, an existing pond that surrounded rockwork and a water rill that was established in 1976. The rill was later removed in 2011.

The bronze interpretation sign that was also designed by Stephen Walker names the fountain ‘Antipodean Voyage’, however over time it has come to be known as the French Memorial Fountain.

The sculpture was inaugurated by his Excellency the Ambassador for France in Australia, Monsieur Gabriel van Laetham on April 17th, 1972.

The plant collection
The plant collection is heritage focussed and represents plant species collected in “Van Diemen’s Land” (which was later known as Tasmania), by French botanists attached to the 1792 and 1793 French expeditions under Bruni D’Entrecasteaux. The existing plant collections have been mostly based on information identified from the various notes and plant lists of one of the first and most prolific French botanists Jacques-Julien Houton de Labillardière. The French made extensive collections with Labillardiere on his early visits to Tasmania in 1792 and 1793, collecting more than 200 species in Southeast Tasmania alone, particularly on the Recherche Peninsula; the collection reflecting an important phase in Tasmania’s early 19th century botanical history.

During the 1792 expedition while exploring the south west coast of Australia commander Bruni was persuaded to turn back to Tasmania after bad weather damaged the ship. Due to a navigational error in search of Adventure Bay on the current Bruny Island, he instead made landfall at what is now known as Recherche bay (named after his ship), to make repairs and get fresh water. While based there various scientific activities were carried out including obtaining further plant specimens through the work of the botanists Jacques Labillardière, Claude Riche and Étienne Pierre Ventenat. 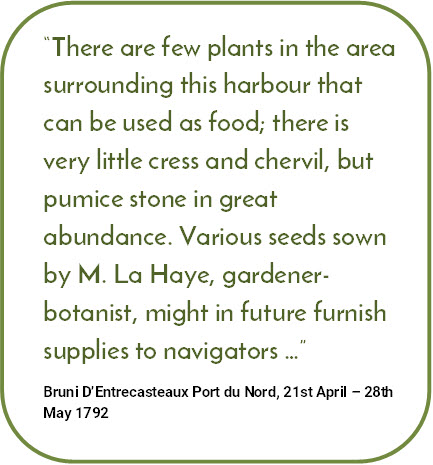 Additionally a production garden was established with Felix de La Haye the on board gardener starting the first European food garden in Tasmania. On return to the site the following year they found that little had grown, possibly due to a number of factors including that it was attempted at the wrong time of the year and we could also surmise that possibly even native animal foraging could have destroyed what was left.

It should be noted that the atypically friendly interaction between the French and Aboriginal inhabitants in 1793 was unique at that time. The early contact between local indigenous occupants and French explorers at Recherche Bay being has been described as cross-cultural celebrations that left a lasting impression on the French. Recherche bay was part of the 3000 square km territory of the South Eastern Tribe, considered to be the most sedentary and maritime of the Tasmanian tribes. The band that controlled the Recherche Bay area were known as the Lyluequonny and records indicate their interaction with the French at Black Swan Lagoon was a peaceful affair.

Other French botanists including Jean-Baptiste Leschenault de La Tour who visited Tasmania as the chief botanist on the Baudin voyage in 1802, also contributed significantly to the understanding of Tasmanian botany at the time. Although he in particular did not produce many publications, his dried collections and other details of plants were widely used by others, including Labillardiere.
Laibillardiere later produced the most comprehensive account of the Australian flora of that time in his 1804-1807 publication Novae Hollandiae Plantarum Specimen, which was largely based on his own collections.

Labillardiere originally collected what is known as the “type specimen” of Tasmania’s floral emblem, Eucalyptus globulus, the Tasmanian Blue Gum. Taxonomists refer back to this specimen even today using it as an anchor, or to centralize the defining features of that particular Eucalyptus species.