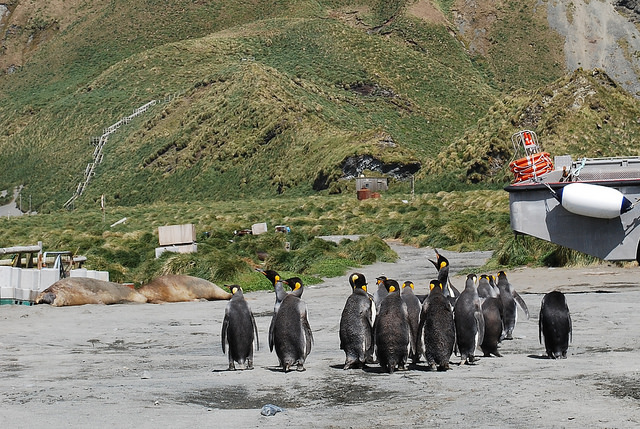 Azorella macquariensis (Macquarie Cushion)is one of only four plants endemic to Macquarie Island. It is the dominant species of the feldmark, a plant community on the plateau uplands comprising of dwarf flowering plants, mosses, lichens, liverworts, interspersed with patches of bare ground. The feldmark covers 45% of the Island and A. macquariensis is considered to be a keystone species of this community.

Macquarie Island is a subantarctic Australian Territory managed by the Tasmanian Government Parks and Wildlife Service. It lies approximately 1545km South Southeast of the Botanic Gardens (see map below) and was inscribed on the World Heritage List in 1997 on the basis of its “outstanding natural universal values”. The entire island is approx 34 km long and 5 km wide and has been managed as a nature reserve since 1970.

Macquarie Island is unique in its origin in that it is a very rare example of recently uplifted oceanic crust formed around 11 million years ago. It is the only place on earth where rocks from the earth’s mantle are being actively exposed above sea level. Unlike other Subantarctic Islands, there are no active volcanoes or glaciers creating geological deposits on the island making its origin entirely oceanic.
Five plant communities have been identified on the island consisting of grassland, herbfield, fen, bog and feldmark. The vascular flora is small, consisting of 46 species and of these four are endemic – Azorella macquariensis, Puccinellia macquariensis(a grass) and two orchid species, Nematoceras dienemus and Nematoceras sulcatum.