The Royal Tasmanian Botanical Gardens would like to acknowledge the Australian Antarctic Division for the ongoing support of this program and the various program sponsors over the years MORE DETAIL.

Azorella macquariensis (Macquarie Cushion)is one of only four plants endemic to Macquarie Island. It is the dominant species of the feldmark, a plant community on the plateau uplands comprising of dwarf flowering plants, mosses, lichens, liverworts, interspersed with patches of bare ground. The feldmark covers 45% of the Island and A. macquariensis is considered to be a keystone species of this community.

King Penguin tour the Station on Macquarie Island while sleepy friends look on.

Macquarie Island is a subantarctic Australian Territory managed by the Tasmanian Government Parks and Wildlife Service. It lies approximately 1545km South Southeast of the Botanic Gardens and was inscribed on the World Heritage List in 1997 on the basis of its “outstanding natural universal values”. The entire island is approx 34 km long and 5 km wide and has been managed as a nature reserve since 1970.

Macquarie Island is unique in its origin in that it is a very rare example of recently uplifted oceanic crust formed around 11 million years ago. It is the only place on earth where rocks from the earth’s mantle are being actively exposed above sea level. Unlike other Subantarctic Islands, there are no active volcanoes or glaciers creating geological deposits on the island making its origin entirely oceanic.
Five plant communities have been identified on the island consisting of grassland, herbfield, fen, bog and feldmark. The vascular flora is small, consisting of 46 species and of these four are endemic – Azorella macquariensis, Puccinellia macquariensis(a grass) and two orchid species, Nematoceras dienemus and Nematoceras sulcatum.

In late 2008, Dr Dana Bergstrom from the Australian Antarctic Divison (AAD) noticed large areas of cushions dying back or dying across the Island. Initial thoughts were that there was a disease spreading through the population, however subsequent extensive surveys and research work is indicating that the cause of the dieback appears to be multifactorial. A contributing factor may be a slight shift in climatic conditions occurring on Macquarie Island. The Primary Industries, Parks, Water & Environment’s (DPIPWE) Resource Management and Conservation Division plant scientists have been conducting a range of research projects on the island and a recently published example can be found at – http://dx.doi.org/10.1071/BT13207

The Royal Tasmanian Botanical Gardens has been involved in the conservation of this species since 2009 when a collection of plants and seed were brought back from the Island to hold as insurance and for research into the cause of the dieback.

The seed collection was received by the Tasmanian Seed Conservation Centre. The collection however was very small and a second collection was made in March 2010. The dense nature of the cushion means that the small,single-seeded fruits are held very close to the plant making collection very slow and difficult in Macquarie’s cold, windy climate. The 2010 collection was large enough to allow germination studies to be performed and testing is currently underway. Initial results suggest that this species exhibits physiological dormancy .

The plant material also presented problems for research work. The RTBG facilities could not provide the strict quarantine conditions required to maintain the plants and they were housed in a coolroom facility at the Newtown Laboratories of DPIPWE. Creating the environmental conditions required to maintain this species long-term is difficult and expensive. With this in mind the decision was made to develop a potted conservation collection on Macquarie Island itself.

In March 2010 Michelle Lang, RTBG Nursery Supervisor, travelled down to Macquarie Island to set up a trial potted conservation collection. Twelve months later all nine plants settled well into their high rise lifestyle (see image). The plants were potted into 800mm long plastic pipes to provide perfect drainage, as well as protection from rabbits and potential soil pathogens. All plants were provided with an automated watering system operated by a rain sensor.

Plans were developed a viable on-Island ex-situ conservation collection, consisting of approximately 50 individual plants collected from wide –ranging populations of A.macquariensis from across the Island. This collection will also serve as a seed orchard, where individual plants may be cross-pollinated to hopefully enhance seed-set and broaden the genetic make-up of the seed collected. 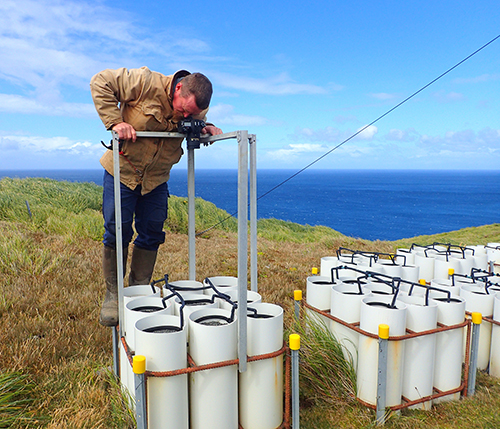 Images of each plant are taken by the Parks and Wildlife Rangers on Macquarie Island each month and emailed to staff at the RTBG, to closely monitor their health. From the comparative images below taken in 2010 and 2012 good growth rates can been clearly seen with a number of individuals, proving this as a successful method of ensuring the conservation of this species. 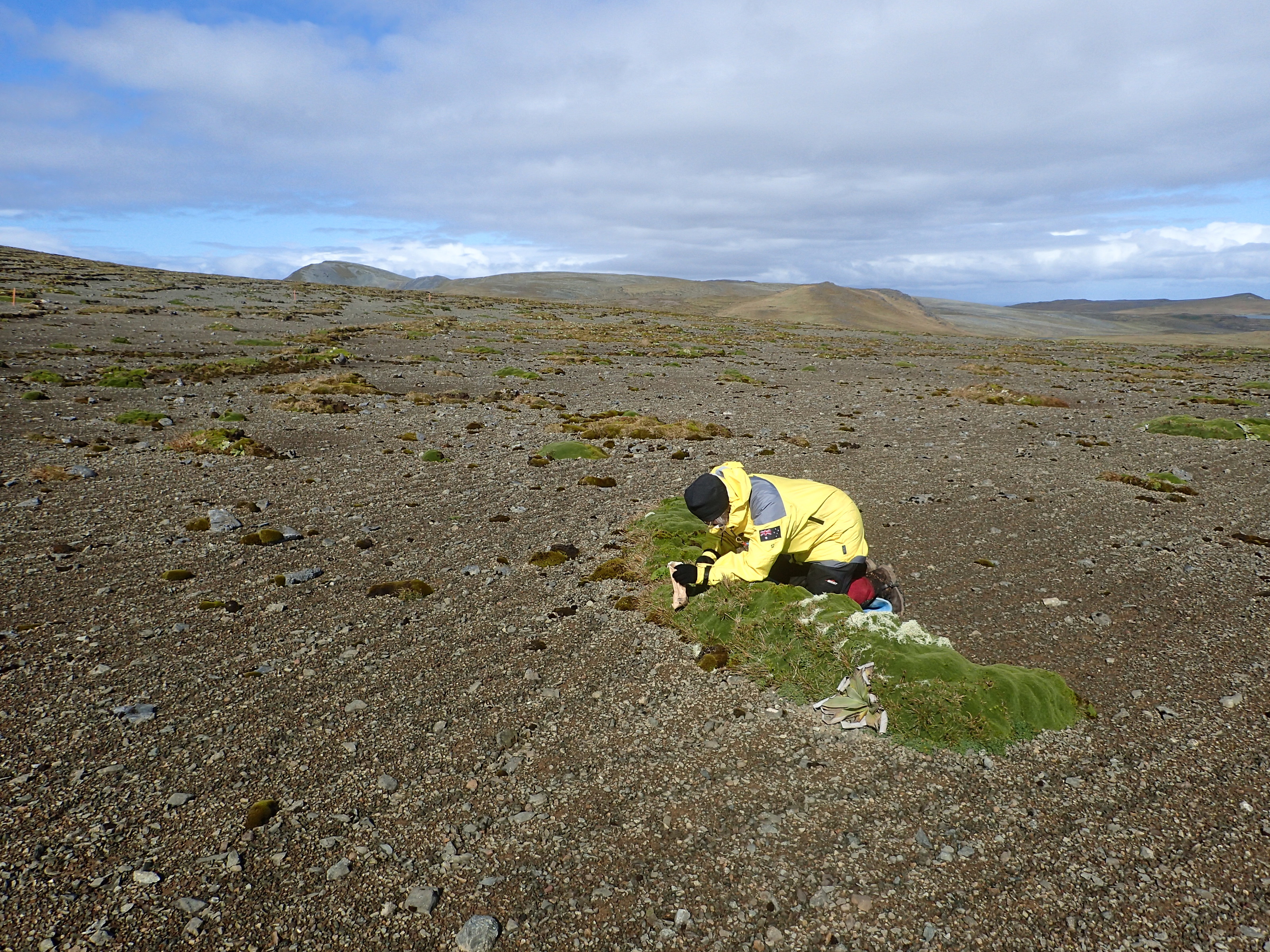 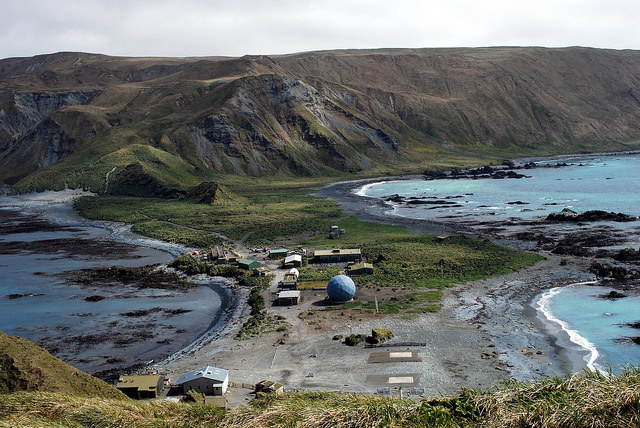 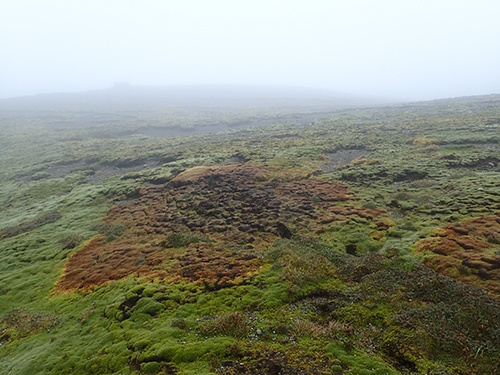 Azorella dieback; can you see the brown patch? 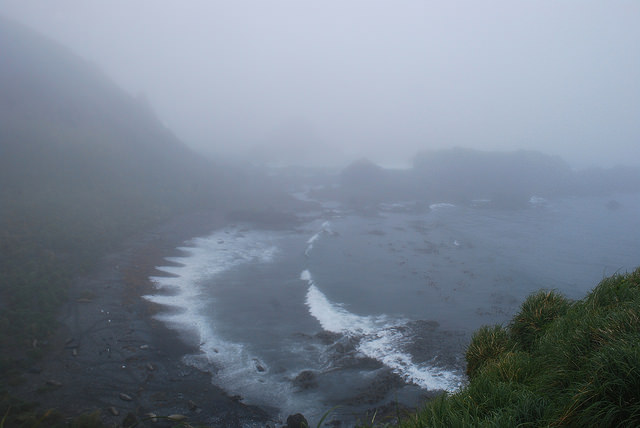 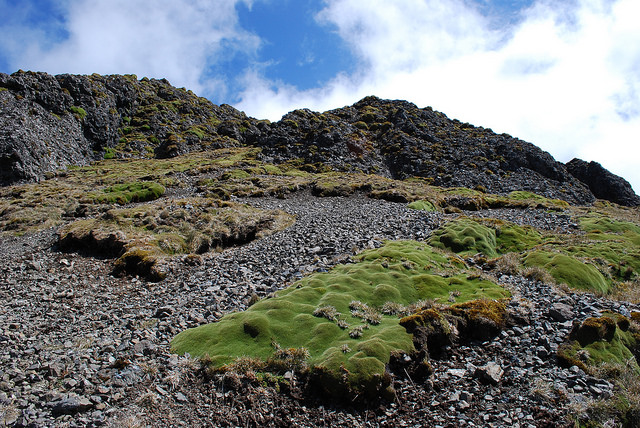 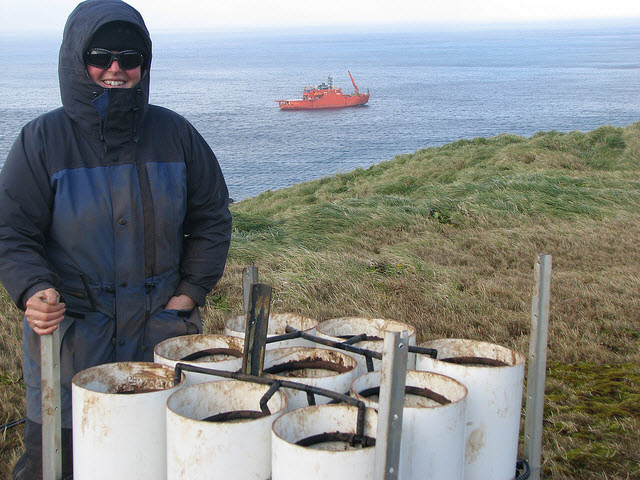 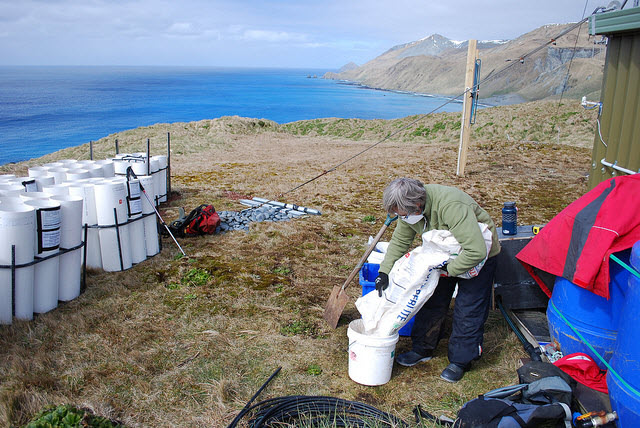 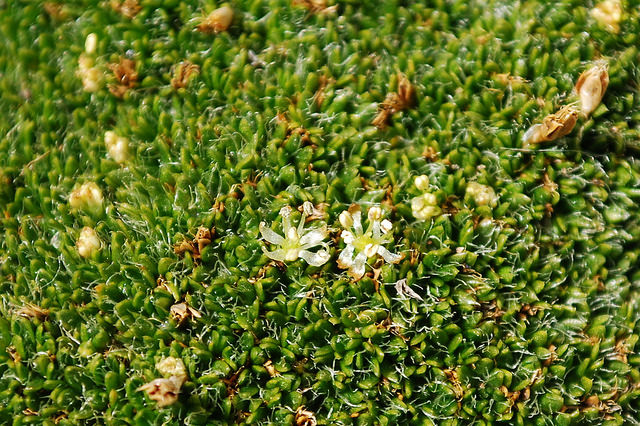 Azorella produce a maximum of 2 seeds each and these ripen during March and April. 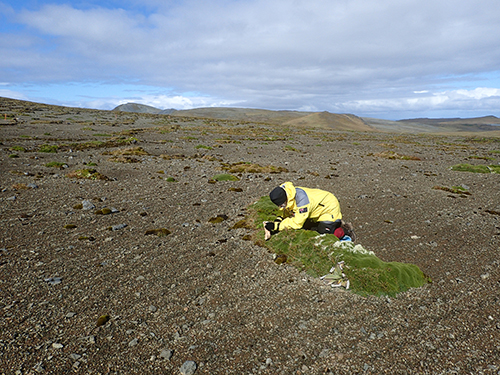 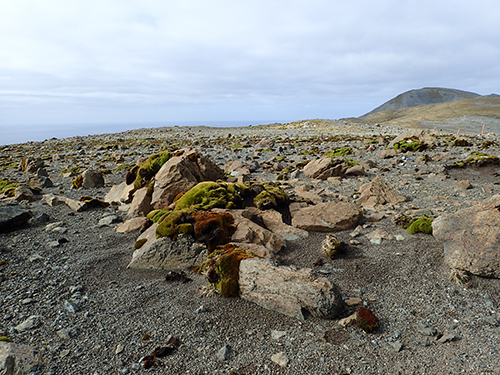 Azorella on the Feldmark, an out of this world landscape!

To prevent the total extinction of this remarkable plant it was deemed essential that a viable ex-situ collection be maintained on Macquarie Island and this has been logistically supported by the AAD and TASPWS. The optimal way to maintain the genetic diversity of a plant species, ex-situ, is through banking its seed. Several attempts had been made to harvest seed from the Azorella population with limited success, due to the health of the wild population, logistics relating to being on Macquarie Island when the seed is ripe and also having enough of time to harvest good quantities of seed. The number of seeds considered to be a good, long term, conservation collection in a seedbank is typically 10,000 from a minimum of 50 individuals.

By 2016 the ex-situ collection of A.macquariensis were growing very well, and it was decided to apply to the AAD for a placement on the island to conduct a seed harvest in 2017.

As is typical for members of the carrot family (Apiaceae) the diminutive flowers of Azorella produce a maximum of 2 seeds each and these ripen during March and April (See image).

The task of harvesting tiny seeds in the “furious fifties” latitude is very challenging. The temperatures on the island during summer range between 3-8°C, rain and snow are frequent and the wind constant. The average wind speed is 25km/hr, with approaching fronts generating gusts up to 170km/hr. Seed collection from this species involves crouching over the plants and individually picking out the small seeds from the cushion with forceps, often for hours on end. Hypothermia is a very real risk under these conditions.

We were very fortunate (and very grateful) that the AAD granted a placement on the Island for the summer season of 2017 and that RTBG Horticultural Botanist Natalie Tapson was willing to return to Macquarie Island to conduct this challenging task. Having previously experienced “Macca”, Nat was very aware of the conditions and requirements of working in such a remote location. Coupled with her extensive seed collecting experience through working with RTBG Seedbank Manager James Wood and the Tasmanian Seed Conservation Centre (TSCC), Nat was the perfect candidate for the role. An added advantage of having Natalie based on the island for the summer period was that she was also be able to harvest seed from the other plant species not held in the TSCC, ensuring that the RTBG works towards securing the plant diversity of the entire island’s flora.

In order to minimise viability loss in the seed before its return to Hobart, it was imperative that any harvested seed was cleaned of debris or pulp and dried down sufficiently in a cool environment. Not an easy task on an island known affectionately as “The Green Sponge”! To alleviate this issue 30 kilos of silica gel desiccant, 3 air-tight containers, and various drying trays were shipped to the island for this purpose, and Natalie was kept very busy sorting, cleaning, and packaging the collections for their safe return to the TSCC.

Once back at the TSCC, samples were tested to determine the numbers of viable seed from each collection before preparing them for long term storage in the freezer.

As stated the peak seeding time for Azorella macquarienesis, is March/April. Unfortunately the shipping schedule and unanticipated pressure for accommodation on the Station resulted in Natalie’s time on the Island being cut short at the critical time. She was based on board the Aurora Australis from the 8-16th March and was only able to transit to the Island for day trips, weather permitting. There was also a concern that some seed may not have ripened fully for harvest. This was alleviated through using a technique of keeping collections of nearly ripe seed separate from the other collections and keeping it slightly moist, but well aerated during the transportation. Once back at the TSCC it was transferred into humidity boxes to complete the ripening process before being dried down for storage. With a concerted effort, (on one occasion consisting of 5 hours of continual surgical-like seed plucking!) an impressive quantity of seed was harvested totalling just over 4,000 seeds.

As well as harvesting Azorella seed Natalie was also able to collect 12 other species during her summer on Macquarie Island amounting to a staggering 562,131 seeds in total.

Many of these species had never been harvested from seed before and work on their germination requirements will commence in the near future.

Future
The ‘captive specimens’ of Azorella macquariensis in our Macquarie Island seed orchard will remain closely monitored over the next few years and continue to be maintained as a conservation collection, effectively ‘buying time, whilst further research is being conducted for the future preservation of this species. The seed collections will be stored in the TSCC as a back-up conservation collection and research into the germination requirements for each species harvested conducted.