Skip to content
Home/STORIES/Could the cork oak save the planet?

Could the cork oak save the planet?

One of the most spectacular trees in the Royal Tasmanian Botanical Gardens is also the oldest of its kind in this region of the world. The Gardens cork oak Quercus suber  is truly of international heritage value, and without doubt the best of its kind in Australia. This tree was planted more than 150 years ago and it has matured into an incredibly beautiful specimen. 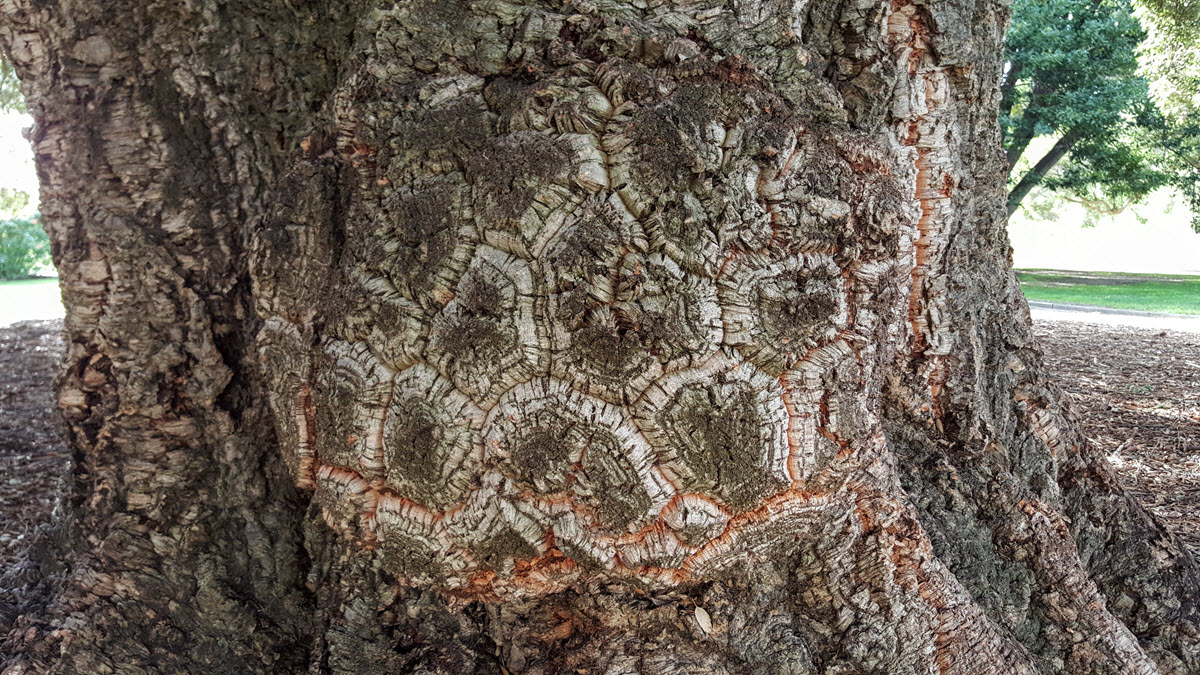 Its expansive and gently pendulous canopy is held aloft by an equally splendid, naturally sculptured truck and branching. There are not many words that really do justice to describe the bark of this tree, a natural wonder that is best seen for yourself. There is something in the feel, because even touching the bark is almost a spiritual experience. The cracks and crevices, fissures and burls all providing a visionary scaffolding for the imagination, thus being captured as fond memories that are cherished by generations of Gardens staff and visitors alike.

The following story has been provided by Richard Forcey one of the many wonderful Royal Tasmanian Botanical Gardens Friends and volunteers who give their time to provide an amazing service to the Gardens. His story is somewhat more than just a personal journey, it is a reflection on the real benefits of the cork oak in the world today and what is its true value apart from the traditional stopper of a bottle.     Editor

Could the cork oak save the planet?

One of the highlights of my duties as a volunteer Tour Guide at the Royal Tasmanian Botanical Gardens, is the chance to regale guests with the story of our magnificent Cork Oak, Quercus suber, standing stately adjacent to the Botanical Shop and restaurant complex. 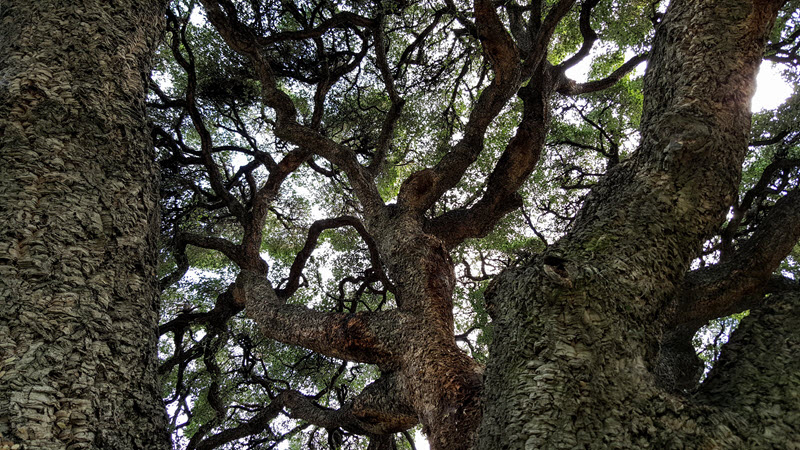 Cork oak branches in the sky

“The species originates in Portugal,” I tell them, to admiring ‘ooh’s’ and ‘aah’s’, “and its bark is used in the production of wine bottle corks.”
The guests admire our Quercus suber, pronounce it splendid, and have their photographs taken beneath its spreading canopy. We move on; it occurs to some to enquire what will become of the wine-cork industry as screw-tops become increasingly popular?

A good question, and one to which I hoped to find the answer during a tour of Portugal, which my wife Shirley and I undertook recently.
The first thing we had to buy upon arrival in Lisbon was a cork-screw! Not a screw- top in sight, the many wine shops crowded with Portuguese wines of all description, every one of them securely corked! This, had it dawned on us at the time, was the first indication of just how seriously the Portuguese take their unique cork industry. 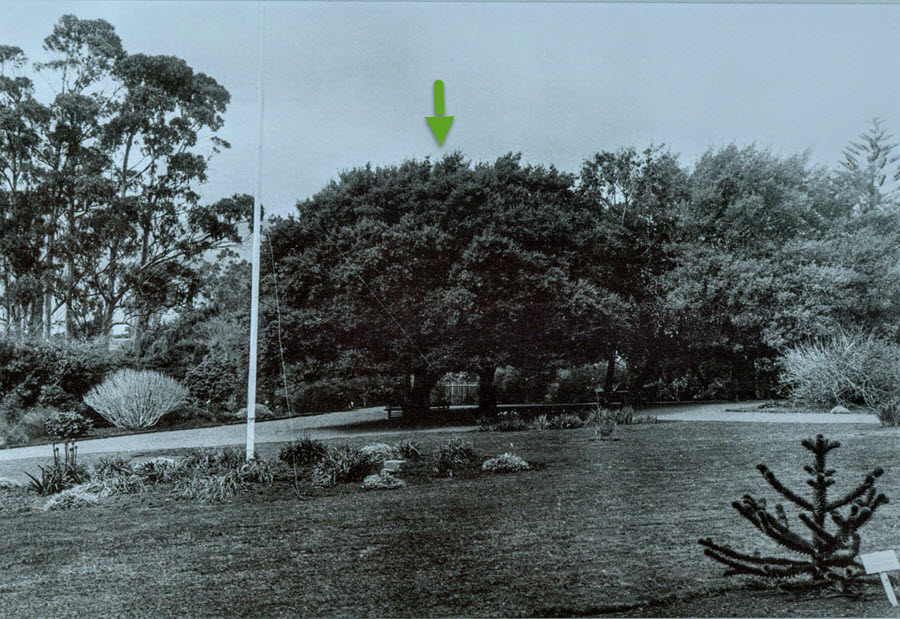 The Botanical Gardens cork oak in 1886

Mentally adding the volume of industrial production such as flooring, insulation, and the like, to the amount required for manufacturing the multitude of decorative items, it quickly became apparent that either a lot of what we saw was synthetic, or there must be millions of cork trees growing somewhere out there, supplying the basic ingredient for a remarkable and sustainable industry.

And such is indeed the case. Approximately 1.2 million hectares of Portugal’s area is given over to cork tree woodlands, or “montados.” The main forestation is in the region romantically named “Alentejo”, or “beyond the Tejo,” the mighty river which flows out of Spain, along the borderlands , and then south-westwards across the central part of the country to empty into the Atlantic near Lisbon.

Cork trees thrive in other Mediterranean areas, including Spain, Algeria, France, Italy, and Tunisia. Only in Portugal however, has the production of cork and cork products been so comprehensively embraced, with 53% of the world’s cork emanating from that comparatively small country.

The Tree:
Quercus suber, the Cork Oak, is one of the few evergreen members of the oak family. It can live for well over two hundred years. It can grow to a height of over twenty metres, but in its native environment it is rare that such a height is achieved. A thick insulating layer of outer bark, thought to be an evolutionary answer to forest fires, is produced as the tree matures. This is the layer of bark – cork – which is duly harvested. 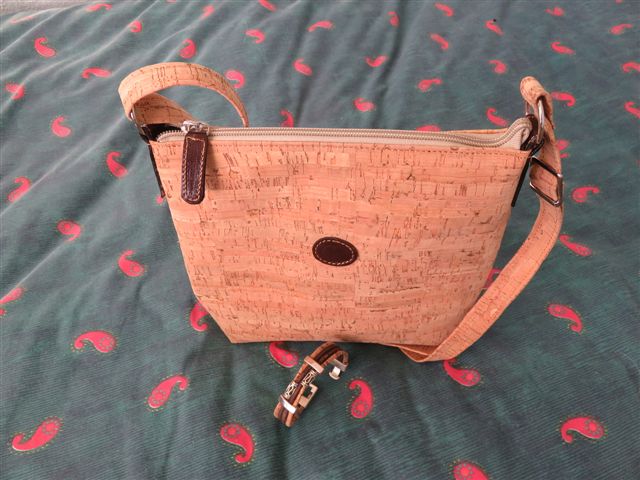 Sustainable contemporary merchandise, all made from cork

A Cork Oak is ready for harvesting when it reaches twenty-five years of age. At this age, the first harvest will yield harder, coarser material which is generally used in industrial applications. As the tree matures, subsequent harvests will produce finer, denser cork. It is not until at least the third harvest that cork suitable for wine closures is obtained.

Harvesting takes place from May through August, the Northern Hemisphere late spring and summer, when the outer bark is more malleable and released from the tree more readily. Cork harvesting is carried out manually; no mechanization is used. Generally, a team of five skilled harvesters will collect cork from selected groups of trees, using a very sharp, small-bladed axe to slit the outer bark. Great care is taken not to pierce the inner bark layer, as this forms the base for re-generation of the cork in due course. Sections of cork up to approximately 900mm x 1800mm are peeled from the tree, and sent for processing. The tree is then marked with a painted number, recording the year of harvest. A “15”, for instance, denotes that harvesting took place in 2015. A further nine to twelve years must then be allowed to pass before the tree can be harvested again.

Cork harvesters are highly skilled and trained. Their wages are not quota-based; they are paid an hourly rate, thus ensuring that emphasis is placed on caring for the tree during harvest. 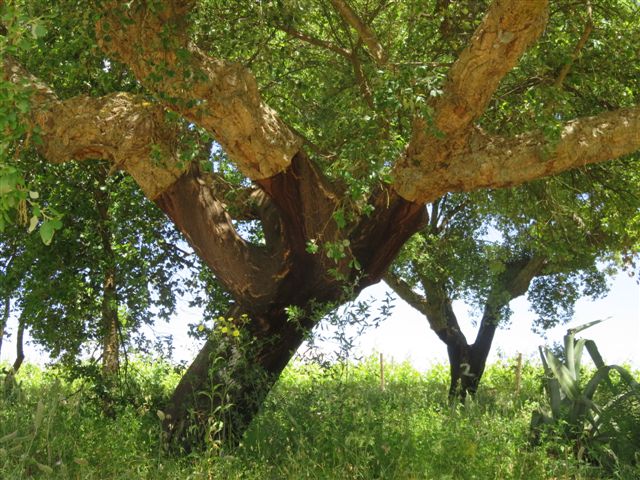 The Environment:
Cork Oak plantations tend to resemble pleasant woodlands, without the regimentation of, say, pine plantations destined for the timber industry. They support diverse ecosystems, happily sharing their environment with many other tree species, including other Oaks, Stone Pines, and wild Olives, in addition to a multitude of plant, insect, bird, reptile, and animal species. Also finding refuge in the forests are several highly endangered species, particularly the Iberian Lynx, the world’s most endangered feline, and the Spanish Imperial Eagle, of which only 130 pairs remain.

In addition to this remarkable environmental friendliness, the Cork Oak has enabled farmers to establish a unique system of mixed farming incorporating trees, animals and crops. Cork Oak acorns provide animal feed; their branches provide shade for the animals in the heat of summer; leaf litter creates humus for soil enrichment and conservation of water, while the more open areas of forest can be utilized for grazing and crop growth.

And after all these favourable points are taken into account, the Cork Oak has yet another environmentally friendly feature to offer: CO2 is one of the main substances utilized by the tree to regenerate bark after harvesting. A harvested tree will store up to five times the amount of CO2 than a tree which is not harvested. It is estimated that Cork Oak forests account for over 10,000,000 tonnes of CO2 absorption per annum.
Cork Oaks are fully protected in Portugal, the first laws being passed in the early thirteenth century. It is illegal to cut down or remove them, living or dead, without a special Government permit.

The Future:
Cork has been used as bottle closures since the times of Ancient Greece and Rome, and the trees revered as symbols of liberty and honour. Commercial production began in Portugal over three hundred years ago, and today, the European cork industry produces over 300,000 tonnes of cork per annum, of which 15% is utilized for the manufacture of wine closures. While this may not seem a huge proportion of total production, over 66% of the industry’s revenue is generated from this sector.

Clearly, the increasingly popular “screw-top” wine closures will have a considerable impact on the industry, and in several countries Cork Oak forestation has started to decline.

In Portugal, however, the opposite appears to be the case. Recognising the value of a sustainable and renewable timber product, a properly managed industry, and the benefits Cork forestations bestow on the environment, Portugal is taking steps to create new areas of demand for their product, fully protecting existing forestation, and gradually expanding areas of planting, with new forestation increasing at present by approximately 4% per annum.

It can only be hoped that the answer to the question, “What will become of the Wine Cork Industry?” is that, as the demand for cork wine closures falls, so the demand for an increasing diversification of cork products will grow, and while the beautiful Quercus suber plantations of southern Europe may not be able to save the planet entirely on their own, that they will nonetheless contribute significantly to Mother Earth’s ultimate well-being.