Home/Uncategorized/Come and Meet a Dinosaur!
­

Come and Meet a Dinosaur!

David’s ropes dangled like spaghetti from the high rock shelf into the partially lit rainforest gorge. The sun was high and the hot breeze had come in from the west encouraging a sweat on the back of his neck, all of which made the cool damp realm of the rainforest gorge below him increasingly inviting. It was drawing him down deeper within the ancient sandstone escarpments that have stood very much untouched for tens of thousands of years. Pausing before embarking on his steep climb down, he had taken a casual glance over the gorge before him and something had caught his eye; a plant, yes, definitely a tree, and one that he had never seen before.

The story above is possibly what David Noble, a NSW Wildlife Officer, might have encountered on that famous day of discovery in 1994. Actually it was the rediscovery of an ancient creature, still alive and breathing! One that had been thought of as extinct, gone completely from the planet apart from a few inanimate fossil imprints in stone, bookmarks of another glorious time in Earth’s history. This was a time much warmer and wetter than it is today with lush rainforest populated by strange beasts.

This lost gorge in the Wollemi National Park, 200km northwest of Sydney NSW, turned out to be a time capsule, one of only three similar gorges found within the area, containing the sum total of the planets population of less than one hundred specimens of young and mature trees.

Botanically it is known as Wollemia nobilis after both the location and the discoverer David Noble. It is a form of ancient conifer, or cone bearing tree; this is the reason for the common name of Wollemi Pine. These beautiful trees have incredible chocolate crackle-like bark and unique dual ranks of leaves along their branch stems when they are mature. A small number of the mature trees in the wild reach heights of 40 metres with trunks wider than 1 metre in diameter. 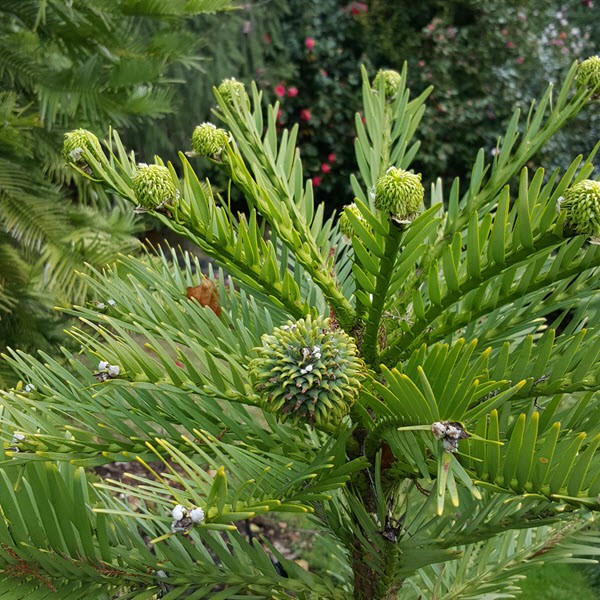 Female cones (Stobili) developing on a Wollemi pines in the Gardens 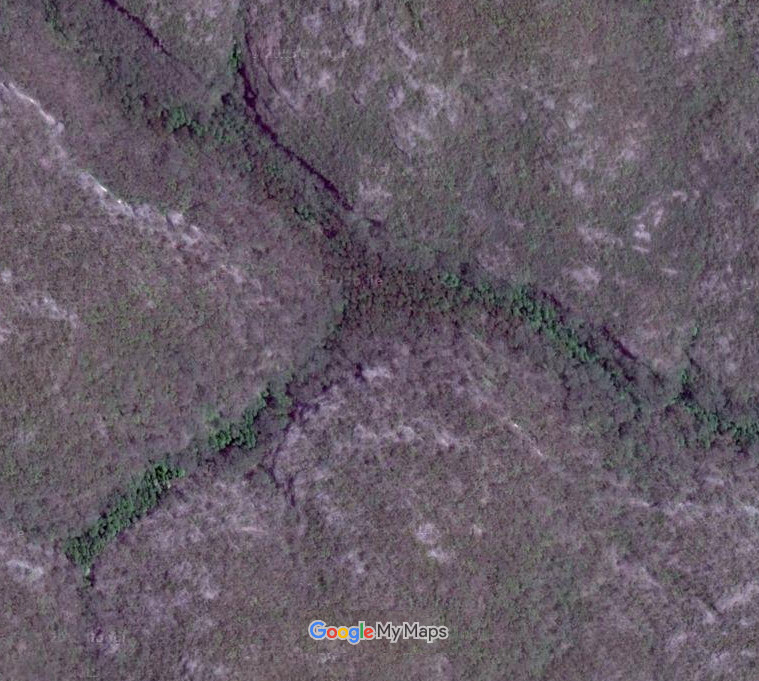 Wollemi National park; some of the gorges from above. Image GoogleMaps 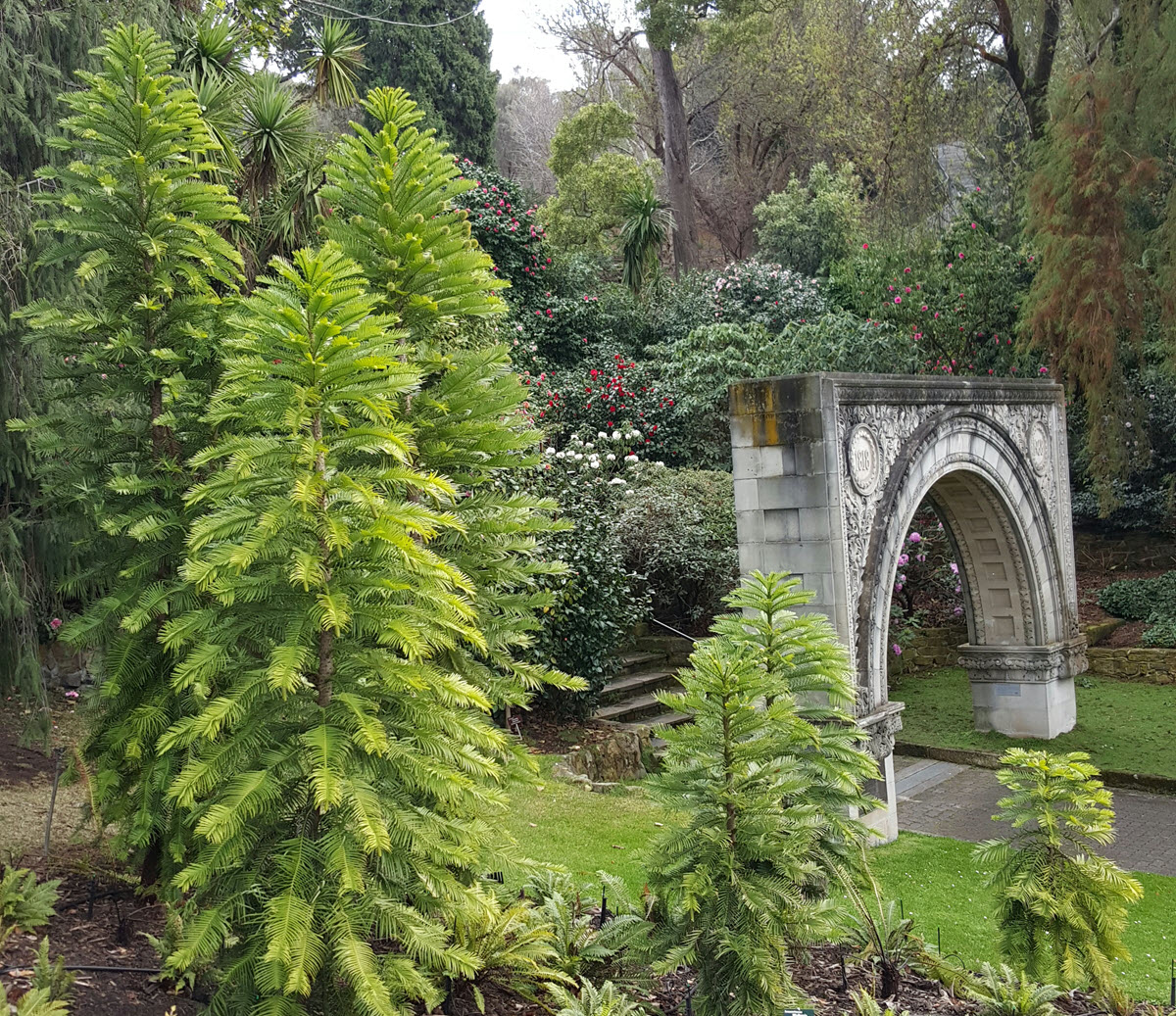 Wollemi pines in the Gardens near Anniversary Arch

The Wollemi Pine belongs to a well known ancient family of plants known as the Araucariaceae that dominated the planet during the reign of the dinosaurs more than 100 million years ago. Family relatives still alive today include the Norfolk Island Pine of that island, the Bunya Pine, Hoop Pine and Kauri Pine of Queensland, the Kauri from New Zealand , the Monkey Puzzle Tree from South America plus others from as far away as New Caledonia.

We also have these dinosaur plants! The Royal Tasmanian Botanical Gardens has a fantastic grove of the famous Wollemi Pines, in amongst our collections of mature ancient Araucaria from Australia and New Caledonia. In late winter through to late spring you will be able to see their cones developing right up close and personal! This is still a rare sight to see and up until a few years ago only a select few were privileged enough to see this in the wild.

You will find them near the Anniversary Arch just to the side of the Visitors Centre in the Royal Tasmanian Botanical Gardens. Have a great time and keep your eyes open for dinosaurs!
For even more detail of the Wollemi Pine please see the websites: http://www.wollemipine.com/ and The Royal Botanic Gardens Sydney 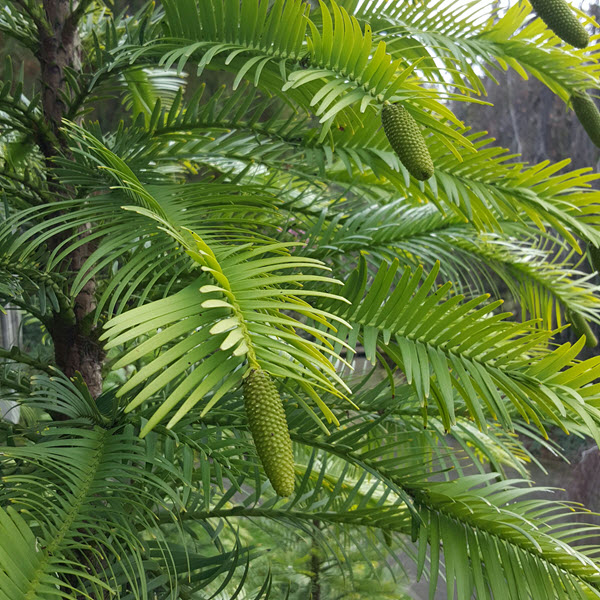