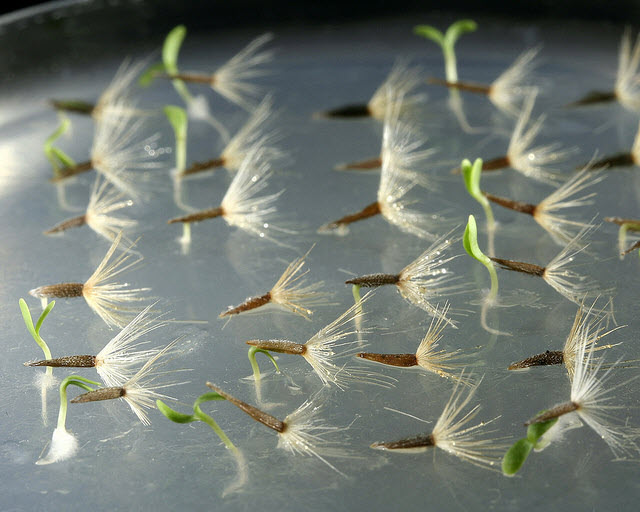 Every viable (living) seed has the potential to become a plant. For this to happen, the seed must germinate, and for germination to occur, a seed essentially needs:

The seed coat ruptures and the radicle pushes through

When the temperature is suitable and there is an adequate supply of water and oxygen, the seed absorbs water and swells. For most plant species, the first visible sign of germination is when the seed coat ruptures to make way for the emerging root tip or radicle (fig. 2). It is generally agreed that when the radicle pushes out through the seed coat, germination has begun. 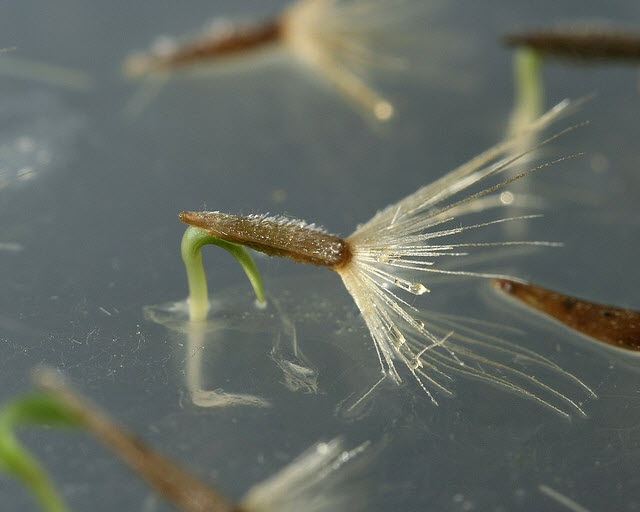 Once the radicle has appeared the seed can develop in one of two ways depending on the species. In seeds with epigeal germination, the cotyledons emerge form the seed coat green, enabling the plant to manufacture its own food from sunlight via photosynthesis (fig. 3). This type of germination is very common, typically displayed by small, light requiring seeds, and will be familiar to many who grow plants from seed.

Alternatively some seeds display hypogeal germination whereby the cotyledons remain in the seed but the epicotyl is released from the seed through extension of the cotyledonary petioles. This germination behaviour is more typical of larger seeded species.

Whilst the radicle is the beginnings of the plant’s root system, the epicotyl/plumule will develop into the future stem and leaves. The plumule will turn green and photosynthesis begins.

As elsewhere in biology there is huge variation to seed germination behaviour. For example Arum maculatum (Cuckoo Pint, Araceae) develops from seed to tuber in the first year, without leaves being produced or photosynthesis taking place1. Germination of Hyphaene thebaica (Gingerbread palm, Palmae) seeds is through extension of the cotyledonary petiole. Growth of up to 25 cm can take place before radicle development is initiated. A number of wetland sedge species also seem to initiate petiole extension followed rapidly by epicotyl development, prior to growth of the radicle. In seeds with ‘double dormancy’ (i.e. differing levels of dormancy in various tissues – typically radicle and epicotyl), there can be a one year delay between growth of the radicle and subsequent growth of the epicotyl. This behaviour has been documented for Lilium martagon (Liliaceae) and Paeonia (Paeoniaceae) species.

A plant’s own food 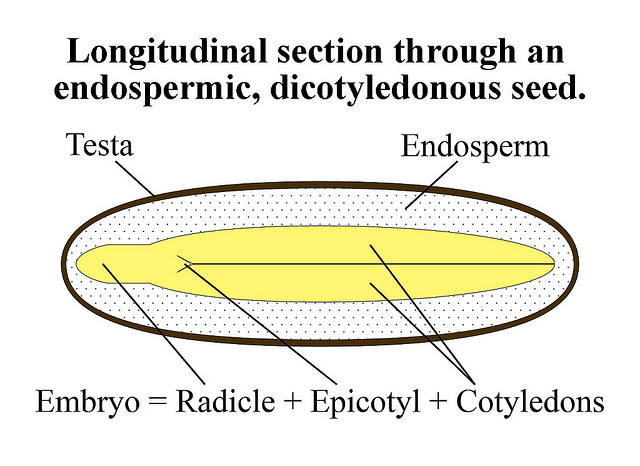 Figure 4. Cross section of a stylised dicotyledonous seed. The relative size of the endosperm and cotyledons is highly variable across seed bearing plant species

Most seeds store enough sustenance in their endosperm and/or cotyledons to give the growing seedling energy until it is big enough to photosynthesise (fig. 4). This level of provision is often tied to the germination strategy of the seed. Light requirement for germination is common for tiny seeds which have little reserve to grow through soil or heavy leaf litter.

However some tiny seedlings can suspend the need to get to sunlight for quite some time. For example orchid seeds (Orchidaceae) are minute and contain very little sustenance. In the wild, orchids develop a parasitic relationship with a fungus (termed myco-heterotrophy) which provides the emerging seedling with food until it is large enough to photosynthesise. For some orchid species this can be a long time, for example the Military Orchid (Orchis militaris) can enjoy up to ten years feeding off its fungal relationship before developing its first leaf! Other species of orchid remain dependent on this relationship all their lives.

A non-dormant seed can germinate over the widest range of environmental conditions possible for that species2, and will usually germinate within a few days of receiving water, oxygen and adequate temperatures.