Below are some examples of the Tasmanian Plant collections within the Botanical Gardens:

The Greater Hobart Garden is often used by students and other members of the public as a resource, regularly helping them identify what grows naturally in the bush around Hobart. Situated at the north western entrance, it also aims to show how native flora can be grown as a horticultural display as well as a means of identification for the public.

There are over 140 species planted in the Garden, these having been collected by Gardens staff from various parts of the Greater Hobart Region. These include areas from New Norfolk to Huonville and Margate, and from Richmond to South Arm, following the line of the Derwent River. These include a number of rare and threatened species, including one (Hardenbergia spp.),  that is increasingly becoming rarer in the wild. See if you can find it in the garden collection next time you visit?

The East coast of Tasmania is known for its beautiful beaches and coastal scenery but many people don’t realise that it has high mountains in the North East, spectacular gorges and waterfalls and a wide range of plant habitats, due to these diverse conditions there are a large number of plants that are endemic to the East coast.

Plants for the Tasmanian East Coast Collection were sourced from along the entire length of the coast, from Flinders Island to the Tasman Peninsula during field trips by Gardens staff. Collecting began in 2000 with the first planting in 2001. To date, the Collection contains 214 plants.

Its focus is on plants that are unique to the East Coast, with plants from a wide variety of vegetation habitats, including dry sclerophyll, dry grasslands, coastal, wet gully vegetation, wet sclerophyll, riparian and some sub alpine flora.

The current Fernery was constructed in 1964, replacing an earlier one on the south side of the lily pond. It was designed by then Gardens Superintendent, Walter Tobias, and modified in 1974 when the cascading watercourse was created.

Take a look around the Garden as a virtual tour. Click the image below to link to Sphere view on Google maps, click the arrows to move. 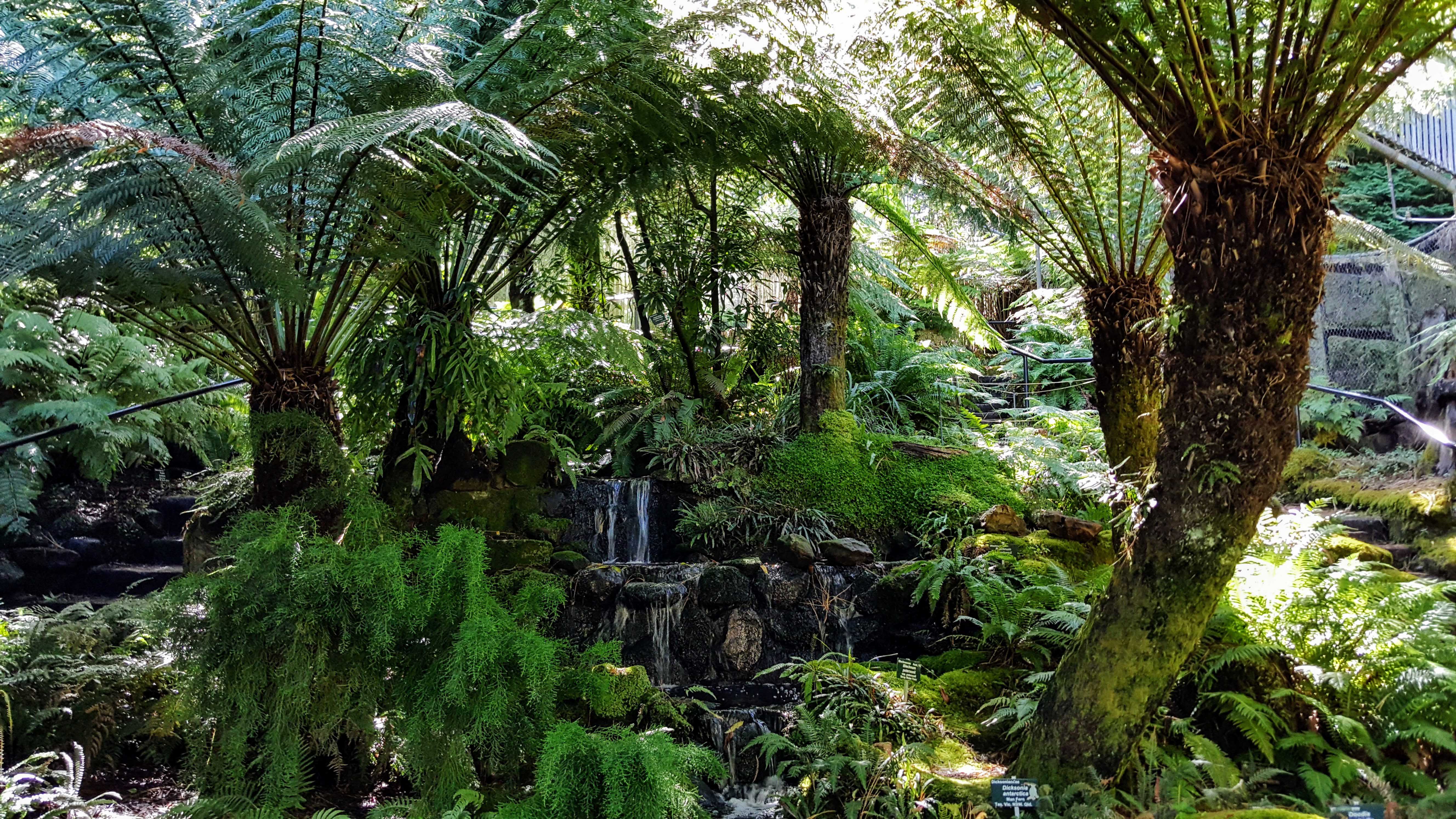 At the entrance to the fernery

During 2001 the RTBG initiated a project to collect Tasmanian fern species state wide, with the objective of displaying a representative Tasmanian collection in the fernery. The resulting display is a collection of provenanced ferns and related species.

Originating from the ancient supercontinent Gondwana, Huon pine Lagarostrobus franklinii is a truly iconic Tasmanian rainforest tree found nowhere else in the world. It is Australia’s oldest living tree species and one of the longest living organisms on the planet with individual specimens known to have reached an age in excess of 3,000 years. It occurs naturally in the western and south-western regions of the state where it grows in its preferred cool moist habitat along river banks, lake shores and swampy ground. Trees can reach up to 40m in height but their growth can be very slow in their some of their native cool temperate locations. READ MORE about the amazing Huon pine.

Click the image below to link to Sphere view on Google maps, click the arrows to move. 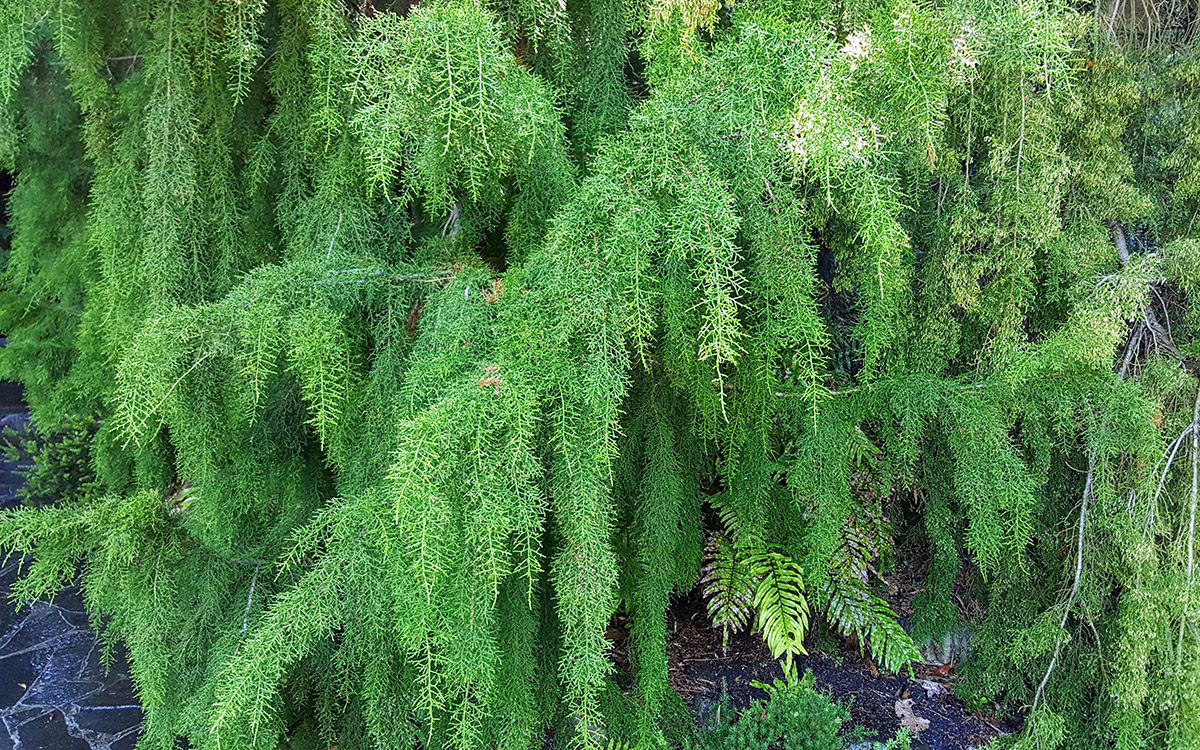 One of a number of Huon pines in the garden

The beautiful golden honey colored timber is highly prized for a range of uses including fine furniture making and boat building. Due to its extreme durability, resistance to rot and ocean worms,  as well as its easy workability, it is considered to be the best boat building timber in the world.

A number of Huon pine plants can be seen at the southern end of the Tasmanian native collection including a very special cutting grown specimen collected from the Mount Read stand. The small (1ha), naturally occurring stand of Huon pines at Mt Read in the west of the state consists of genetically identical male clones originating from a single specimen at least 10,500 years ago.

This garden was established in 1991 in recognition of the need to develop an area dedicated to the display of Tasmanian Native plants within the RTBG.

Specimens are arranged in habitat groupings ranging from alpine through to coastal flora. Most of the plants have been propagated from material collected on field trips throughout Tasmania including numerous rare and threatened species.

Take a look around the Garden as a virtual tour. Click the image below and then click the arrows to move. 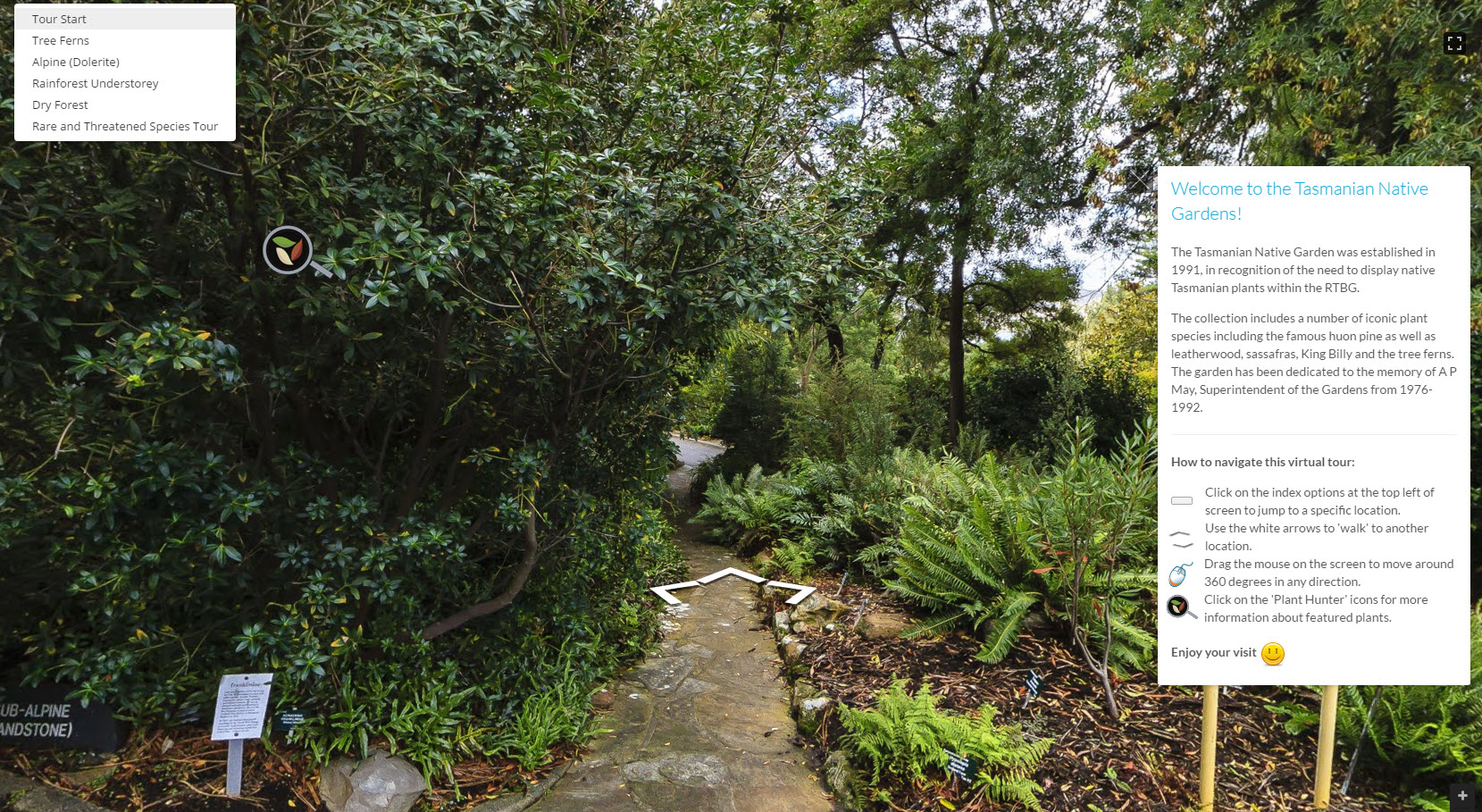 Over 240plant species are on display including the famous Huon pine as well as Leatherwood, Sassafras, King Billy and the tree ferns. The garden has been dedicated to the memory of A P May, Superintendent of the Gardens from 1976-1992.

The collection features the French Memorial Fountain. The sculpture, reminiscent of the bow of a French ship, was created in 1972 by Tasmanian artist Stephen Walker to mark the bicentenary of the first of a number of French voyages of discovery that visited Tasmania. It’s presence in the Gardens acknowledges the contribution of early French explorers and scientists to the understanding of this island state.