Dormancy on the outside

Exogenous dormancy is considered to be on the outside of the seed; associated with the seed’s external covering structures such as the seed coat or pericarp (table 1). 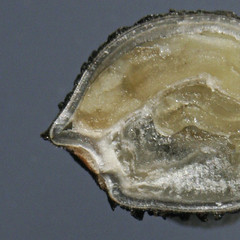 Seeds exhibiting physical dormancy (PY) possess covering structures that physically prevent the seed from absorbing or imbibing water (fig. 1). Since water is necessary for germination, PY seeds must be made permeable to water before germination can begin, which is usually achieved by chipping or cracking the seed coat.

In conclusion, dyagnosing chemical dormancy is difficult. However if the factor preventing germination is thought to be chemical, and not physical or physiological, it may be leached (washed or soaked) from the seed, or deactivated3.

Mechanical dormancy is said to be caused by seed covering tissues mechanically restricting embryo expansion and development (table 1). However the ‘mechanical dormancy’ of many species has been found to be the result of endogenous factors such as low embryo growth potential and therefore actually physiological dormancy.

For example, when the embryo growth potential increases to the point of radicle emergence, germination occurs without the need to alter the resistance of restraining seed covering structures4. A small study conducted at Kew’s Millennium Seed Bank looked at the benefit of acid scarification on germination of a range of stone fruited and woody seeded Rosaceae species. Most species displayed a physiological dormancy that, once addressed, led to germination; the tough covering structures apparently easily overcome. No benefit of acid scarification was observed and in fact at high levels, scarification was detrimental (unpublished work).

It has been suggested that both exogenous and endogenous factors determine the dormancy of some Iridaceae (Iris) seeds. For example it was concluded that the hardness of the seed coat was the main cause of dormancy in Iris lorteti (Iridaceae), in which radicle protrusion was found to require a pressure of up to 135 atm (1368 newtons of force/cm2). This is one of the highest seed coat resistances ever recorded! Only when the testa was cut at the micropylar end of the seed, did germination occur. However, extracts prepared from the endosperm of I. lorteti acted to inhibit germination, and interactions between this inhibitor and the hardness of the testa were not ruled out5.

Seeds that are prevented from germinating by their fleshy fruit and not their seed coat are considered quiescent, not dormant6. To prevent confusion, it is suggested that dormancy be evaluated after seeds are released from fruits.